Westminster will help a regional effort to quiet Rocky Mountain Metropolitan Airport — to the tune of $7,810.

“This will bring forward a study that would look at how to mitigate noise for the community,” said City Councilor Lindsey Emmons, council’s alternate voting member for the roundtable.

Emmons said that one of the consultants will facilitate meetings during noise roundtable meetings.

“It’s very awkward, when you get in those contentious discussions, to not have a neutral party help facilitate past those discussions,” Emmons said.

Another will provide aviation consulting services, according to the meeting’s agenda.

Mayor Pro Tem David DeMott said Jefferson County Commissioner Tracy Kraft-Tharp, a voting member on the community noise roundtable, called him to answer any questions he had regarding the agenda item.

“This specific study is actually going to get experts who will work with the actual pilots that pilot out of the airport so they can understand the egress and degress and actually think of what ways we actually impact this,” DeMott said.

Julie Story, a spokesperson for the airport, emphasized that addressing noise issues is a regional effort, not just a single county or city. 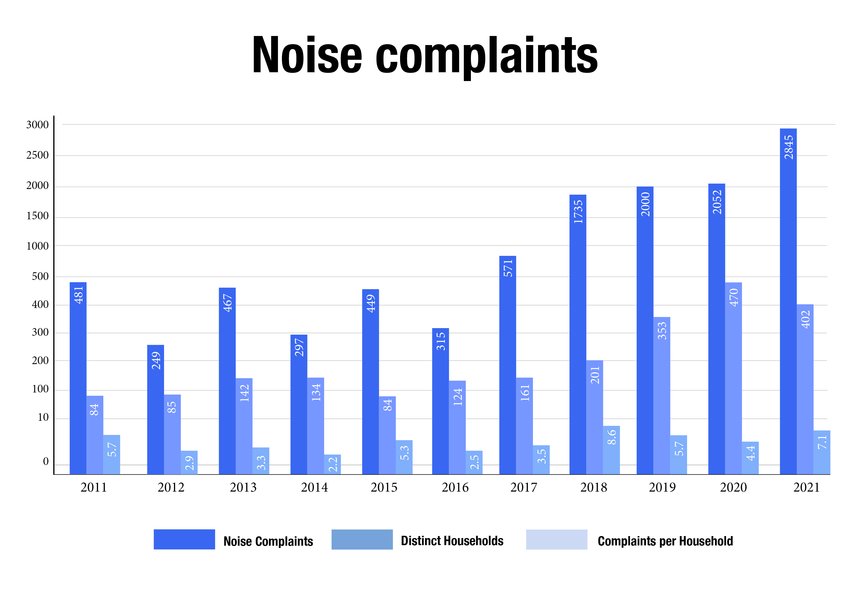 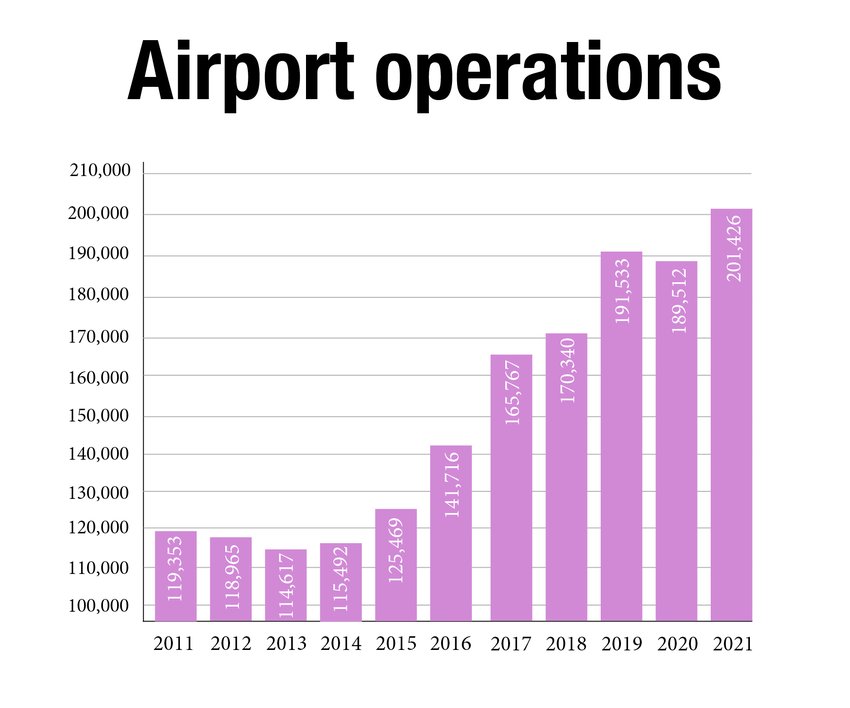 At the same time, the surrounding communities — Arvada, Broomfield, Louisville, Superior and Westminster — have increased their populations by about 13%. The total number of residents of all communities increased from 299,295 in 2010 to 338,806 in 2019. From 1990 to 2019, there has been an overall 68% increase in population, according to Story.

Paired with these increases came community investments. DeMott noted at the city council meeting the commerce the airport brings.

According to Story, Rocky Mountain Metropolitan Airport provides more than 3,000 jobs totaling $190 million in annual pay, more than $700 million in annual business revenues to the region and approximately $27 billion in indirect annual economic value, according to the Colorado Department of Transportation’s 2020 Aeronautics Economic Impact Study.

With noise complaints and operations rising, the airport created the Community Noise Roundtable.

From the Jefferson County website, it says “Formation of the Rocky Mountain Metropolitan Airport Community Noise Roundtable (RMMACNR) ensures representation from all potentially impacted stakeholders, including surrounding communities and jurisdictions, airport users, and the FAA, so that any requested change in aircraft operations by one community, does not negatively and unfairly impact another.”

Charlene Willey of the Save Our Skies Alliance, a 28-year Westminster resident, thinks the formation of the group is not genuine, however.

“The Community Noise Roundtable is a pat response from the (Federal Aviation Administration) to noise complaints. They exist around the country, although they might vary a bit from locale to locale,” she said.

She criticizes the roundtable for only including elected officials and no community representatives, though community members can give a three-minute public comment prior to meetings with a 30-minute cap on input.

“Rocky Mountain Metropolitan Airport’s Community Noise Roundtable was put together by Jeffco, so they had a hand in the selection of communities,” she said.

On Aug. 5, a petition from the Save Our Skies Alliance signed by 1,500 people was sent to Jefferson County commissioners Tracy Kraft-Tharp, Andy Kerr and Lesley Dahlkemper to address impacts on surrounding residents including noise and lead pollution.

The petition asked the commissioners to “...require an update to RMMA’s 2011 Master Plan before approving any plans for additional development and expansion. An updated Master Plan will ensure that the Environs and Land Use Plan is brought current, and that a proper environmental analysis is completed, which will include an updated noise contour map.”

The petition also says “The strategic business plan does not address aircraft noise impacts, possible flight path changes, or an increase in flight activity due to potential development of available land at the airport.”

Anslow said that he does not have control over who he can lease space to at the airport.

“The strategic business plan is just a tool for me to strategically layout the best development opportunities that are brought to the airport,” he said. “We can’t discriminate against businesses that want to build here.”

He said that many complaints from the community are in regard to the flight schools and it is not in his power to reject their proposal.

He said it’s entirely market-driven and his job is parallel to a landlord: he can’t discriminate against who he rents space to.

“I can’t force the electric plane company to market their aircraft here,” he said.

However, he said that noise does come into consideration when it comes to airport strategy. One possibility is to lease space at the airport to manufacturers who do not fly planes as often as flight schools, instead of vendors who would cause a lot of noise, he said.

“(Noise) is not the biggest factor but it’s also not the smallest factor,” he said. “They all go together about what makes sense for the airport.”

Anslow also said that the airport has no power over what airplanes do once they lift off.

The Federal Aviation Administration controls everything for airplanes in the air, he noted.

The petition also points to health concerns regarding noise levels and lead pollution.

“NIH studies have established that noise has a serious negative impact on human health, resulting in increasing costs for medical care. We estimate the increase in annual costs of this impact by county as follows: Jefferson County $29.6 million, Boulder County $16.6 million, Broomfield County $3.5 million,” the petition says. However, the source for this information was not cited.

The petition also points to lead coming from airplanes. 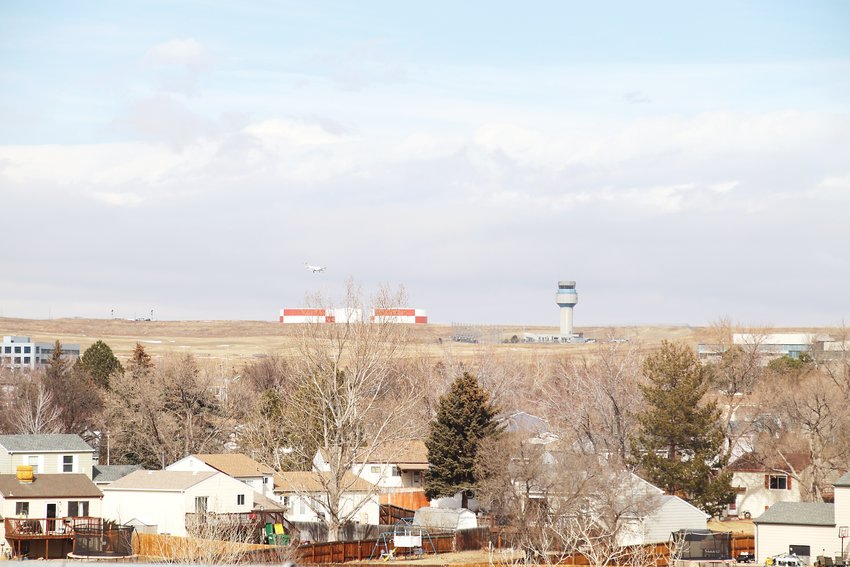 A plane lands at the Rocky Mountain Metropolitan Airport. About a 1.5 miles away, where this photo was taken, is Witt STEM Elementary School.

According to the 2017 Environmental Protection Agency National Emissions Inventory, Colorado has five airports of the top 100 lead-emitting airports nationally, including the Rocky Mountain Metropolitan Airport (the former Jeffco Airport), which sits at 63.

“(The lead) falls to the ground as lead particulate, landing on our houses, schools, playgrounds and open space. It leaves dust that we breathe in; it coats our cars and enters our homes and workplaces. It builds up in soils, creating a toxic legacy for the unwitting gardener or hiker who then disturbs and redistributes it,” Willey said.

The airport dropped 580 pounds of lead in 2017, according to the study, and residents have been complaining about higher traffic from the airport starting in 2018.

Anslow said that nothing has been done to reduce the amount of lead coming from airplanes, however, notes he doesn’t have much power over the issue.

“It’s just like filling up your car. Is there anything you can do to change the fuel that’s put into your car? No,” he said. “I have no control over the federal regulations and the EPA and the people that control fuel to be able to control leaded fuel versus unleaded fuel.”

He said it’s up to the FAA and the EPA.

“Aircraft that are out there in the market today, the piston aircraft, fly with a FAA, EPA approved fuel that the federal government manages and I have no say whatsoever in changing that,” he said.

“The fuel that is being burned is being regulated by the federal government, and we’re being told that it’s safe,” he said.

Critique of the Continuum: Is Westminster's response to homelessness enough?
Alan Farb isn’t satisfied with Westminster’s response to the rising homelessness in the city and he made that quite clear during their Nov. 14 study session discussion of the city’s …
Perfect Holiday Gift calling for more donors, volunteers
Thornton’s Perfect Holiday Gift program is calling for more donors and volunteers, and potentially more participants.  Raquel Jiménez, community connections coordinator, said the …

Colorado’s Prop 123 affordable housing initiative could face rocky future
Voters in November also sought to reduce their taxes and, taken together, the changes could lead to difficult decisions down the road.

Consumers encouraged to keep some holiday spending local
Reality is simple: Local businesses are at a disadvantage when competing with the price and convenience of Amazon and online shopping offered through the big-box stores such as Walmart and …